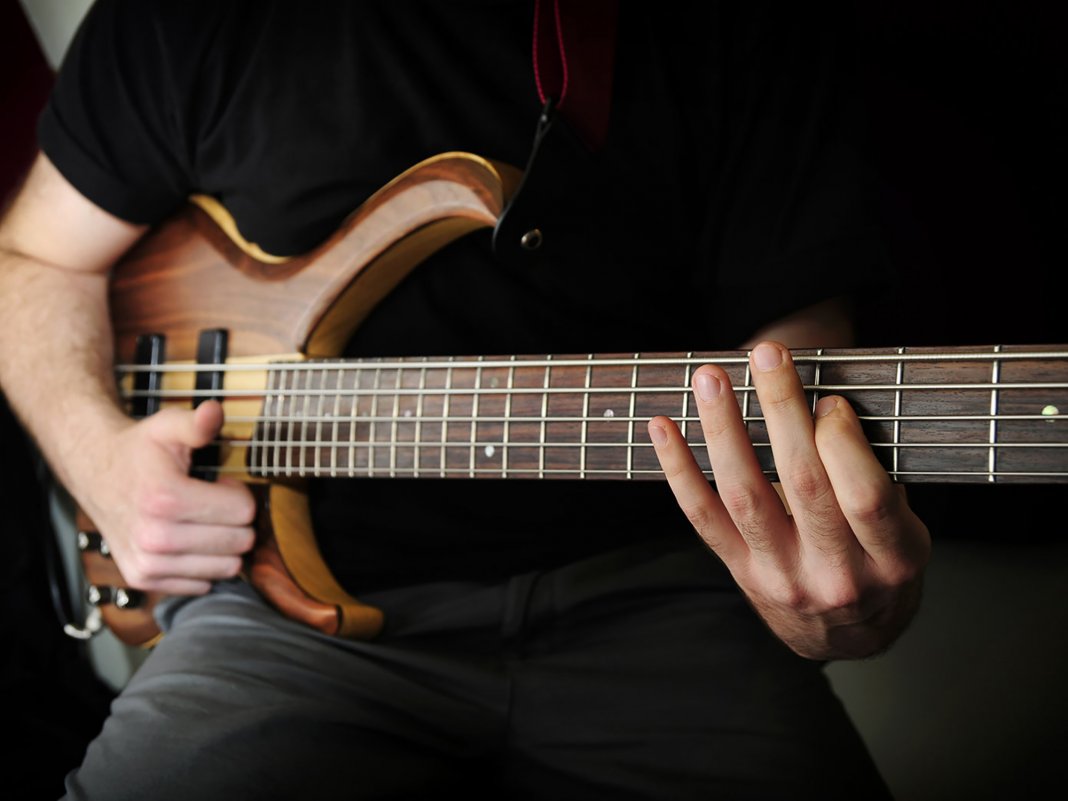 For musicians, learning to play funk guitar may be a tremendously gratifying experience. It features unique beats that are challenging but cool and enjoyable.

Even so, it may be difficult to follow for beginners. We’ll go through the fundamentals of how to play funk guitar in this section.

How Do You Play The Funk Guitar?

First, consider what distinguishes the funk guitar from other musical styles.

The funk guitar is a rhythm guitar style. It functions similarly to a drummer in a band, providing a beat and harmonizing with the lead instruments or vocals.

You’ll have to study grooves over melodies or chords when learning how to play funk guitar.

A song’s overarching rhythmic pattern is called a groove. A melody is a single note sequence, whereas a chord is a group of sounds played together. Unlike both of these definitions, groove places a greater emphasis on a song’s overall vibe.

Your goal is to create a tune with groovy baselines and surprise jabs that people want to dance to.

To play funk, you don’t need a special electric guitar. Despite the fact that bass guitars seem more groovy, learning to play funk guitar is more about technique than gear. 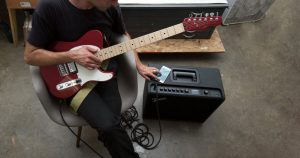 Knowing the origins of funk music might help you draw inspiration from the great.

In the 1960s, funk was established by James Brown, a musician and singer-songwriter. To establish this genre, he drew inspiration from jazz, soul, and R&B music. Many consider his tune “Make it Funky” to be his debut funk composition.

In funk, you may notice the influence of jazz music. Make it Funky, for example, features a trombone, saxophone, and trumpet. In contrast to jazz, funk music emphasizes odd baselines and syncopation. It also accentuates the first beat, which is referred to as “The One.”

We’ll explore about how some of these fundamental notions look in funk farther down.

Steve Lodder is a well-known British keyboardist who has performed with artists such as Harry Beckett and Paul McCartney. “There’s a rule of thumb in funk music that states short sounds are better than long,” he wrote in his 2005 book on iconic records, “so the drier the guitar strike, the tighter the horn stab, the slappier the bass, the more clipped the clavinet, etc., the better.”

You’ll pick up ghost notes, scratching, and side sliding as you read these principles to learn the funk guitar. But first, let’s take a look at The One. 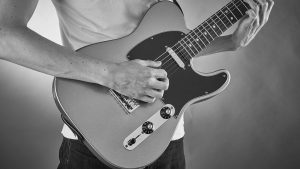 The 2nd and 4th beats of a four-count melody are emphasized in jazz and blues music. In funk music, however, the first note is emphasized instead.

Practice hitting your strings on the first beat to accomplish the One. Then take a three-count break. At first, you can tap in between the Ones to get a feel for the beat. Then begin to intersperse the same One note with slides, progressions, or stabs.

Notice how James Brown harmonizes with the initial guitar beat in this video performance. He cries “hey!” to everyone.

This video is a great illustration of how funk guitar can complement the rest of the band. It emphasizes the one without dominating the music like a lead guitar would.

A stab is a high-pitched note placed in the middle of a count to contrast with the remainder of the sound.

A stab can also be a staccato tone. Staccato means “separated,” and in music, it refers to striking a note immediately following a rest.

Because the saxophone, trumpet, or other horn players frequently hit the stab, it’s commonly referred to as a horn stab. Jazz, blues, and funk are all examples of this. You can harmonize better with the rest of your band if you develop a rhythmic stab.

Usually, the horn stab is a brief note. You either deaden it or move on to the next, lower-pitched note after hitting it. It provides the music a little of drama and gives listeners an unexpected beat to dance to.

You must deadline your strings to play ghost notes on the funk guitar. Deadlining is another term for muting, which is done by pushing forcefully on the strings with your palm. Then, when you strum, you’ll hear a’scratchy’ sound.

As a result, you get a deep bass sound that sounds like a drum. Because you don’t hear a pitch, but you feel a vibration added to the tune, it’s a rhythmic action.

The use of ghost notes distinguishes funk from other rock music styles. Guitar notes can ‘ring’ or linger for a second after hitting the string in many genres. However, in funk music, a note is usually deadened shortly after it is played.

Fast playing and deadening are what maintain a funk music funky, engaging, and fast-paced.

Playing odd rhythms and accents in a groove is known as syncopation. We use the term “offbeat” to describe notes that aren’t expected. In music theory, something can look like this.

Those numbers indicate your strum actions, and many songs will have you focusing on the numbers. However, in funk music, the and could be emphasized instead. As we’ll see in the 16th note rhythms section, you can even add notes or transitions between them.

Prince’s music includes a lot of funk influences, despite the fact that many people associate him with pop. Listen to “When Doves Cry” for a syncopated beat with focus on the 2nd and 3rd beats.

Rhythms on the 16th Note

One of the most crucial melodies to learn on the funk guitar is this technique. Imagine four notes every beat to grasp the concept of a 16th note rhythm.

Many chord progressions use the “1 and 2 and 3 and 4” count. You’ll strum down on the number (for example, 1) and up on the ‘and.’ An 8th note strumming pattern is what we name this approach.

You should strum up on every e and an in this pattern. You strum down on every number or ‘and.’ In total, you’re striking 16 notes in a single count.

Side Sliding is a technique for sliding from one side to the other.

You approach a chord from a semitone down when you side slide on a guitar.

As a result, you strum your first chord and then move on to the next without touching your strings. For rhythmic funk songs, this technique creates a smooth, seamless transition that underpins the groove.

Remember to maintain the pressure on the strings low as you slide with this method. You can reduce the noise in motion by loosening your grasp.

For groovy side sliding, listen to Average White Band’s “Got the Love.” Instead of abruptly flipping, you can hear the chord change in this song. 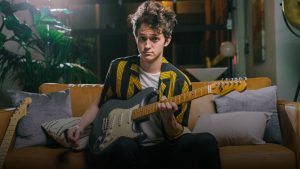 We discussed how funk music emphasizes groove over chords in the previous section. Even so, you can use some important guitar chords to bring a jazzy guitar diversity to your music.

Many funk chords preserve the root on the first, low E string, which is a trend you’ll notice. They also make distinctive sounds by harmonizing major and minor notes.

We won’t go through how to play these popular funk chords with your fingers. However, we will give credit where credit is due and encourage you to use this as a beginning point for your own practice.

The E9 chord has been dubbed the “James Brown Chord” by many. Both James Brown’s “Get Up (I Feel Like Being a) Sex Machine” and Wild Cherry’s “Play That Funky Music” use the E9 chord.

The low E string, as indicated earlier, is the E9’s root note. You get a higher-pitched version of the sound if you move it to a D9.

The E9 chord functions similarly to an E7 substitution. The E7 chord is a popular one on the guitar, but the E9 lends a jazzier feel to it. It’s also simple to play from the fretboard’s centre. It produces a full, resonant tone when played with an open E string.

The E9 chord is one of the most commonly used funk guitar methods. It generates a nice, cool, and deep sound that isn’t depressing. It’s coolness makes it ideal for a dance beat.

You can also find more easy jazz guitar songs that use this chord.

To reach the E9, many guitarists employ a 13th chord as a passing chord. The E13 is an extended chord, which means it stacks more than four tones on the seventh.

In many funk songs, prolonged chords are adjusted in some way. Playing a sharp eleven or a flat thirteen in this manner lends itself perfectly to the syncopation strategy we discussed.

Tower of Power’s “What is Hip” is one song that uses the E13 chord. The song “Play that Funky Music,” which we recommended under the E9 chord, also uses an E13 chord.

Because it mixes a major third and a minor third, the Hendrix chord is intriguing. The base notes balance it out into a gloomy, hip tone, so it doesn’t seem out of tune.

Many guitarists use it as a turnaround chord or as a transition chord from one section to the next.

This V-shaped chord was used by Jimi Hendrix in many of his songs. “Purple Rain,” his 1985 smash, is one of the most renowned instances. It can also be heard in the chorus of “Foxey Lady” and in his song “Spanish Castle Magic.”

Combine it with a distorted guitar effect to get the most authentic Hendrix sound. The distortion gives the chord a gritty quality that works well with the harsh funk scratching sound.

You can obtain distortion with an amp or a pedal, or you can mix the two for the best of both worlds.

Notes on a Single Line

On funk music, we went through a few key notes. However, often the simplest, single-line notes are the most effective for funk.

Because the purpose of the funk guitarist is to groove with the band, he or she may have to make room for the keyboardist or singer to take the lead. And you don’t want a complicated guitar progression to take over the song—as great as it is!!

To play a single line note, utilize the deadlining method we discussed before. To assist you stress the single notes, cover as many strings as possible with your hand.

Micheal Jackson’s “Don’t Stop Til You Get Enough” is a well-known song that uses single line notes. The guitarist fingerpicks between A and B during Michael’s speech in the introduction. It starts out with a fantastic groove before fading into the background for the major chorus.

Last but not least, here are a few hints for playing funk guitar.

For a newcomer to funk, it can appear to be difficult. It uses a combination of strumming, deadlining, and unusual note patterns to make it apart from traditional guitar techniques.

But, to get started on the funk guitar, start with these fundamentals: E9, 16th notes, scratching, and muting

When it comes to funk, less is sometimes more. Instead of writing from scratch, you can learn a lot by playing simple chords that add to funk music you hear.

You can improve your skill by performing hit funk tunes once you’ve mastered these fundamentals. Then you’re well on your way to mastering the art of playing funk guitar